“It is neither their meat nor their blood that reaches Allah, but it is piety from you that reaches Him.” Qur’an 22:37

All Muslim adults who are eligible to pay Zakat must make an animal sacrifice. By giving your Qurbani, you are fulfilling your religious obligation to provide quality, nutritious food to the poor. 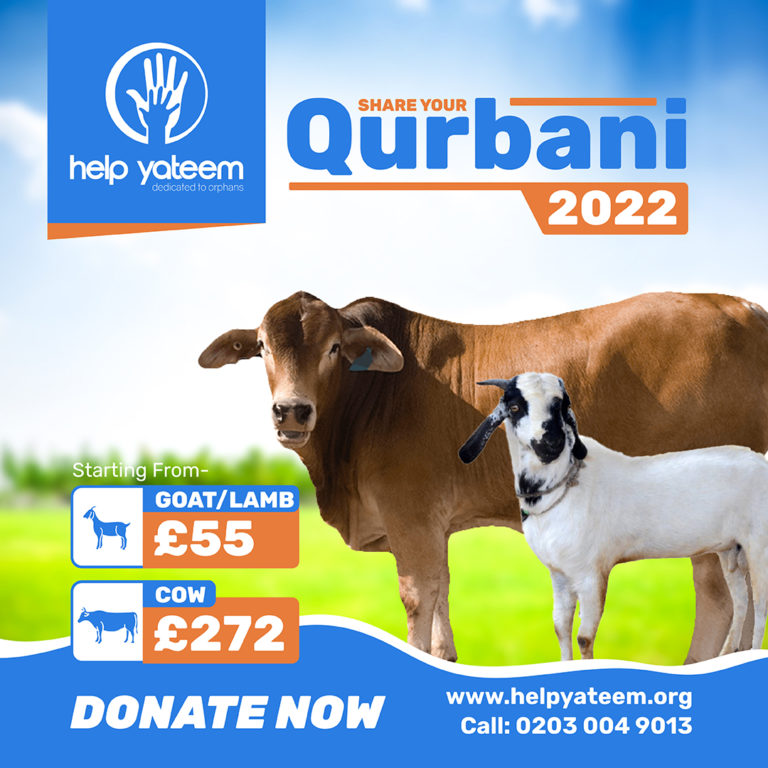 Qurbani means sacrifice. It is a sacred act to honour the tradition of the blessed Prophet Ibrahim (AS), his beloved son Ismail (AS) and their story of sacrifice and devotion to Allah (SWT).

We called to him, “O Ibrahim, you have fulfilled the vision. Indeed, we thus reward the doers of good. Indeed, this was a clear trial.” – Qur’an 37:104

The practice of Qurbani can be traced back to the Prophet Ibrahim (AS).

It is a sacred act to honour the tradition of the blessed Prophet Ibrahim (AS) and Ismail (AS) and their story of sacrifice and devotion to Allah SWT.

Those who receive the Qurbani meat include widows, orphaned children, refugees, the poor, and the elderly or disabled people. For the majority, meat is not part of their regular diet. The Qurbani meat allows some families to eat meat after a whole year. Your Qurbani can provide up to 60 meals.

When families receive Qurbani meat, it allows them to celebrate Eid with nutritional food along with millions of other Muslims across the world. Reap the rewards of the 10 best days. Give your Qurbani today.

Who is Qurbani Compulsory for?

According to many scholars, Qurbani is an obligation for all sane adult male or female Muslims who meet the Zakat threshold (nisaab).

The Prophet (ﷺ) said, “It is the Sunnah of your father Ibrahim (AS). For every hair of the Qurbani you receive a reward from Allah (SWT).”

Where will my Qurbani be distributed?

We will be distributing Qurbani meat to impoverished people across Kenya, Somalia, Ethiopia, The Gambia and Yemen.

Do I need to do Qurbani on behalf of my children?

· Every sane Muslim of mature age who has wealth above the nisaab.

· Those who possess wealth which is beyond their needs, equal to (or more than) the current level of nisaab

Do I need to give the names for the people of the Qurbani?

No, this is not necessary as long as you have made the intention that you are giving this Qurbani on behalf of a certain person.

When will Qurbani be done and when should I clip my nails or cut my hair?

Until the new moon of Dhul Hijjah appears (i.e. on the 1st of Dhul Hijjah) it is recommended not to remove hair, nails or skin until the sacrifice has occurred. Unfortunately, we cannot give you an exact day when your Qurbani will be completed as there are many factors involved in the logistics of organising and performing Qurbani on a large scale. We recommend if you are observing this opinion to avoid removing the above until the 12th day of Dhul Hijjah (the third day of Eid)

Can you do more than one Qurbani?

In short yes, you can do as many as you wish. The Prophet (SAW) carried out multiple Qurbanis for himself and the Ummah.

Can I do Qurbani for a deceased person?

Yes, you can. It is not an obligation however it can be done as Sadaqah Jariyah for a loved one. Many Muslims around the world offer multiple Qurbani for our beloved Prophet SAW.

When should I make payment?

You should do this as soon as possible. We will take Qurbani orders until Maghrib time on 10th Dhul Hijjah (Eid day).

How do we define costs of Qurbani?

At Help Yateem, we are always looking at ensuring Qurbani prices are kept as low as possible but there is always an inflation of livestock around Qurbani time. The costs of Qurbani includes not only the purchasing of the animals, but also support costs, which are essential to ensure that good healthy animals are purchased and taken care of as well as selecting the most vulnerable people to give meat to.

Helping Orphans Break Free From the Cycle of Poverty